October 29, 2016
I recently started a low-carb diet. It's been pretty rough, seeing how several years of my life I've basically subsisted off popcorn and candy (both big no-nos on the keto diet). But I've found a few low-carb treats that have really helped!

Most recently, I've discovered an amazing low-carb recipe for lemon cupcakes. The original recipe can be found here, but I tweaked it for easier measurements and the fact that I don't have any Meyer lemons on hand. Also, I'm a bit of a pig who doesn't have mini cupcake pans and wouldn't want to eat mini cupcakes anyway. Top them with your favorite low-carb frosting.

This recipe made me 18 cupcakes. When I plugged the recipe into MyFitnessPal (without frosting), it told me one cupcake had 1.2g net carbs, which is amazing for how delicious they are.

You'll start with 2 1/2 cups of almond flour. If you can, you'll want to use blanched almond flour (in which the "skin" is removed before grinding) which is a much less bitter flour. When measuring almond flour for baking DO NOT compact the flour, even as you're scooping it out. Almond flour is much heavier than all-purpose white flour, so you want to be careful or you'll end up with dry, crumbly cupcakes. Just lightly scoop the flour and then use a knife to skim off the extra flour. This will leave you with a few pits in your cup of flour, which is definitely okay.

Measure out and mix everything together except for the stevia. Then add the stevia to taste. I added 1/2 cup of my cheap sugar-equivalent stevia from walmart, but most low-carb sweeteners are actually sweeter, so you may want less. There is no right or wrong answer here. Start low, then gradually increase. You can always add more; it's really hard to remove once it's mixed in.
The batter will be really runny at this point. I'm talking about the consistency of pancake batter. I ended up using a ladle to add the batter to the cupcake liners. A serving spoon just wasn't going to cut it. Before ladling, you may want to spray your cupcake tin or liners with a bit of veggie oil. I found that the paper liners stuck to the cupcake more than I wanted, and I missed out on that layer of delicious lemony goodness.
Then you'll bake them at 350° for 14-16 minutes. 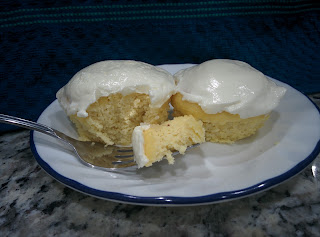