These will make a fantastic Christmas gift for that person in your life who thoroughly enjoys
the fantasy genres, or the general genre of "Awesome Women Kicking Butt". Buffy is quite an empowering character who proves you don't have to give up your femininity to be strong, and the writing is nearly perfect.


The idea for the Buffy series came to Joss Whedon when he was thinking about classic horrow films. They all include at least one pretty, dumb, utterly incapable blond girl who was either murdered or needed to be rescued. She was a quite one-dimensional character. Whedon thought it would be quite nice if he had the pretty blond girl walk into the dark alley or basement and come out having soundly kicked the dark horror's butt.

In fact, there is an underlying theme throughout the series that the pretty, popular cheerleader and shoe-in for Homecoming Queen is pulled away from the life she loves by a destiny she neither searched for nor wanted. She has become her generation's Chosen One: A powerful super-heroine whose purpose is to battle the forces of darkness. And the only way a Potential Slayer becomes The Slayer is when the previous Slayer dies. Which not only means that somebody had to die for Buffy to gain these powers, but that she will one day die for somebody else to take up the mantle of Slayer. As she says, "Each Slayer comes with an expiration date." She goes from happy, carefree, beautiful girl to a deadly, beautiful weapon who wonders if she'll make it past college age. 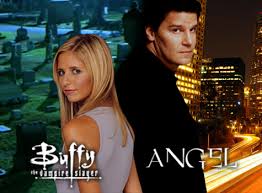 Angel is a Buffy spinoff that features the attractive, brooding vampire named Angel--who happens to be Buffy's first boyfriend. Angel is a vampire cursed to walk the Earth eternally with a soul, which basically turns him into a tortured do-gooder. Set after the first three seasons of Buffy, Angel moves to L.A. (the city of Angels--get it?) and sets up shop as a kind of supernatural private investigator fighting evil one case at a time, endeavoring to protect the world from destruction by evil demons and such. You get to meet new characters and see reprisals from the characters you know and love from the Buffy series.