A Tribute to Hufflepuff - Decorated Bottle 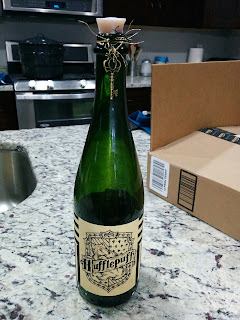 I feel that Hufflepuff is a rather underappreciated and undersold House. Even J. K. Rowling herself has commented on the fact that those who think Hufflepuff is a House for "the leftovers" should be pitied, presumably because they don't get to experience this great House for themselves. Aside from the fact that it's really hard to find a Hufflepuff who's a jerk (and who wouldn't want somebody from the most loyal of Houses as their friend or partner?), this is the House that gave us Nymphadora Tonks and Cedric Diggory. And if you can't appreciate Cedric, remember that he got kind of screwed over by Harry being in the Triwizard Tournament and is basically the only person in Hogwarts who didn't give him crap for it.

In the fifth book, the Sorting Hat had this to say of this House: "Said Hufflepuff, "I'll teach the lot and treat them just the same."" Isn't it kind of amazing that this is not only the House that accepts everybody for who they are, but also treats them *exactly the same*? There's no laughing at others for their different abilities and interests, no shaming them. This is probably why Tonks and Luna were able to thrive and become such powerhouses.

J.K. Rowling had this to say of Hufflepuff House staying to fight in the last book: "The Hufflepuffs virtually to a person stay, as do the Gryffindors. Now, the Gryffindors comprise a lot of foolhardy and show-offy people. That’s just the way it is. I’m a Gryffindor; I’m allowed to say it. You know, there’s bravery and there’s also showboating, and sometimes the two go together. The Hufflepuffs stayed for a different reason. They weren’t trying to show off, they weren’t being reckless. That’s the essence of Hufflepuff House."

Now that we've established that Hufflepuff is a unique and fantastic House, let's get down to our Hufflepuff Tribute Bottle.

After a lot of trial and error creating a label with the Sure Cuts a Lot software to use with my Cricut (which I bought used for $60), I decided to just print a label from my inkjet printer. I printed it on some pale yellow paper I had on hand from a purchase at a thrift store some years ago. Then I trimmed it down to size. You could burn the edges like I did with the Marauders' Bottle, but I liked the stark contrast of the blunt-cut edges on this one. Click on the picture below for the full resolution of the label.

Apply the label using a minimal amount of glue on the vertical edges. You can get some interesting warp when you glue paper, so I don't recommend plastering the entire label with glue. You'll need to hold the label in place for a minute or two while it dries enough to stick by itself.

While the glue dries, you can take this opportunity to cut a length of black and gold embroidery floss. I used gold instead of the standard canary yellow for Hufflepuff, but you can use whichever you prefer. You could also use ribbon instead if you want this to be a less subtle effect. I got a fun, big assortment of embroidery floss on Amazon at a little under 10 cents per skein. I got my metallic embroidery threads a la carte at Walmart, but you can pick up a whole set on Amazon. Unless you buy some really expensive metallic thread, it won't be very useful in actual needlepoint, but this stuff is great for other craft projects!

Wrap the threads around the neck of the bottle and lace on a key charm. These keys come in all sorts of metal alloys, but I had a set of aged bronze on hand, so that's what I used. Tie a square knot to hold the threads and key in place, then trim the separated stands to different lengths in order to avoid a too-even look.

Since Martinelli's bottles don't come with corks, I had to get inventive with the stopper. I had received a lavender soap bar for free recently, and I decided to use it to create the stopper. If you're good at whittling, I'm sure you could make a fine stopper directly from the bar using only your knife. I would just recommend using a less expensive colored bar of soap, like maybe this one. I'm not that talented, so I started by cutting the soap bar into the approximate shape and size I wanted for my stopper. (You can soften it in the microwave for a few seconds first, if you need to.) 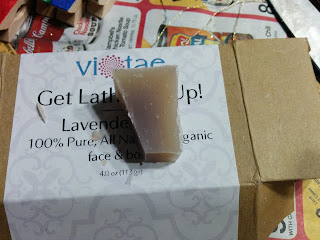 Then I nuked it in the microwave on a paper plate for about 20 seconds. This softened the soap enough that I could push it gently into the opening of the bottle. You don't need to create an air-tight stopper, since we're not actually holding any liquid in this bottle. It just needs to look nice. 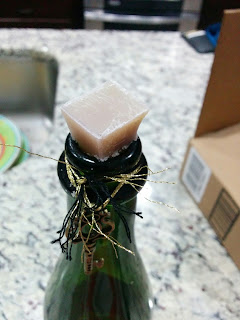 And now you're done! Enjoy your Hufflepuff Bottle. If you haven't already, you might enjoy the instructions for making your own Marauders' Bottle (my tribute to Gryffindor) that I posted earlier today. And stay tuned for instructions on making bottles for the other Houses! 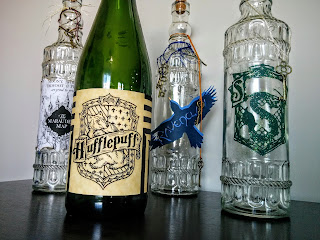