The Kingkiller Chronicle: The Name of the Wind

I thought I'd start us off with a review of my favorite book of all time: The Name of the Wind.

Now, I realize the title sounds like it might be some wistful romance novel (the original cover art certainly doesn't help dispel that notion), but this is actually an epic chronicle of dual timelines. In the present, you meet the simple innkeeper who is in reality Kvothe, the legendary (near-mythical) hero and villain of thousands of stories. This is Kvothe the Arcanist, the Bloodless, the Kingkiller. While some strange demon attacks the present and forces Kvothe to put aside his charade of mediocrity for small periods of time, we engage mostly with Kvothe's past, told from his own lips. From his youth as a travelling performer with his family, to the time spent starving in the streets, to a daring and dangerous bid to attend the magical University, we become the hero of this novel through the enchanting narrative. Kvothe's purpose becomes our own as we dare to learn the higher magic of naming and push to discover all there is to know about the Chandrian, demons of legend who murdered Kvothe's family. 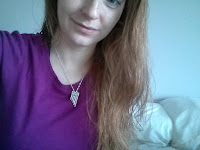 This is a powerful coming of age story with a clever protagonist who makes us feel that we, too, are included in a circle of scheming intellect. It seems to me that Rothfuss works hard to make Kvothe's arrogance his biggest character flaw. This is one I can identify with; we both caught on easily to school subjects, then got a slap in the face from life. He grows, and we grow with him. Kvothe makes mistakes, earns bitter enemies, and forges fiercely loyal friendships--all before he leaves school. We break when Kvothe becomes an orphan and we laugh when he outsmarts and mildly humiliates a bitter, unyielding teacher while still playing inside the rules. You may even find yourself buying a set of "talent pipes" to match Kvothe's. (Not that I'd know anything about that...)

The narration is masterfully meticulous. Unfortunately, that means years go by between book releases. In one blog post, Patrick Rothfuss catalogues how he once spent an entire day searching for the perfect word in a passage. The word ended up being "girlish". I suppose I am recommending this book while also telling you to beware: You'll get sucked in so deeply, and there will be no closure until he releases the third book. That happy event does not appear to be happening anytime soon.

This isn't necessarily a series I would let my preteen read. It definitely deserves a PG-13 rating, if there was such a rating system for books. (Is there? Does anybody know of one?) It's full of language, though I don't recall the F-word making any appearance. There is a bit of innuendo in the first book, but most of it is viewed through the rose lenses of innocence, and serves mostly as a bit of humor surrounding Kvothe's naievety. The second book has a weird arc in which Kvothe is barely-not-forced into a sexual relationship, after which he is much more free with his sexuality. I remember these parts to be easily skimmed/skipped. To his credit, Kvothe still yearns for a romantic connection, particularly with a woman named Denna. But to me that makes certain parts even more uncomfortable.

Read the books. Read them again. See the colors, hear the music, dance with the characters as they laugh with abandon. Then open the eyes of your friends to this masterfully crafted world. It's a place you will not wish to leave.
Action Coming of Age Epic Fantasy Fantasy Lazy Book Club Magic